In the previous three parts, I outlined the plan for getting geometry from MapTube via C Sharp into an FBX file using the C++ SDK provided by Autodesk. This final part shows data in a world map exported from MapTube and imported into 3DS Max. 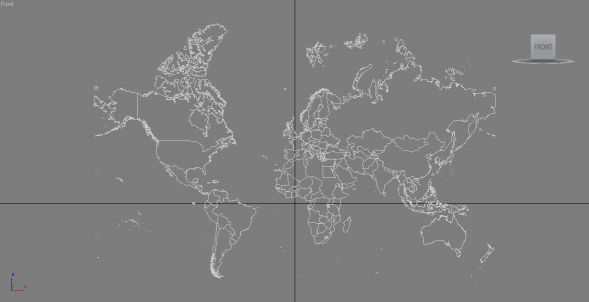 The above image shows the world countries 2010 outline from MapTube. There a few countries missing as there was no data for them in the original dataset, so they show as blank on a MapTube map and their geometry is not exported. This is more visible in the perspective view where you can see the holes in Africa and the Middle East: 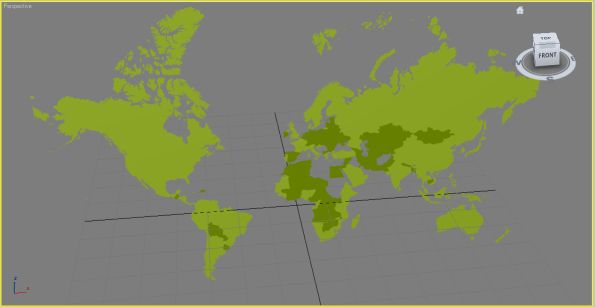 The exported geometry will eventually be coloured in the same way as MapTube, but for the moment all the geometry objects have a green material assigned to them.

The final export file can be downloaded from the following link: MyFBXExport

It’s worth pointing out that I’ve had a number of problems with the Quicktime FBX plugin that comes with the Autodesk FBX SDK. It seems to crash every time I close it and when displaying the above file there are some significant problems with how it renders the geometry. Most notably around the Hudson Bay area in Canada, parts of Europe and much of Russia. As it displays fine in Max, I can only assume this is a limitation of the Quicktime FBX renderer. I’ve also had to do some re-scaling of the geometry as it is exported in the Google Mercator projection, using metres. This means that the numbers are too big for Max to handle, so I’ve had to rescale them.

To recap on how this process works, here are the development steps needed to achieve it:

1. A C Sharp program which is a modification of the MapTubeD tile rendering procedure reads the geometry and data from the MapTube server and returns it as an iteration of SqlGeometry objects.

2. Each SqlGeometry object is simplified using the Reduce operation as we don’t need the full level of detail in the output FBX file.

3. The C Sharp program uses native methods in a C++ DLL, which I’ve written to control the operation of the FBX exporter in Autodesk’s SDK. A handle to the FBX document and scene that we want to create is obtained and then a native “AddGeometry” function is used on every geometry object until a final “WriteFile” function is called. The geometry is passed using the OGC well known binary format which is an efficient way of passing large blocks of complex geometry and is also independent of byte ordering.

The DLL which does the actual export is a 32 bit program with functions exported using C names rather than decorated C++ names to make it easy to link to the C Sharp function stubs. Internally, I’m using the GEOS library to parse the well known binary geometry, extract polygons and write the points to the FBX scene hierarchy.

That’s the proof of concept to demonstrate that this method works. The aim now is to see what we can do with geographic data now that we have the ability to load it into art tools like Max and Maya, game engines like Unity, or frameworks like XNA.