Skip to content
John Conway’s “Game of Life” was one of the first things I ever wrote in Java, back in the days when we were using 1.1. This is a slight variation on the traditional 2D view, where the alife simulation is wrapped around a spinning globe. The results are shown below, along with the link to the web page containing the applet.

The way this was created was as follows:

I’ve defined my axes with x to the right, z up and y into the screen. This is slightly unusual, but maps to the ground plane which was originally XZ.

The mesh of points can be wrapped around in the x direction, but not Z, so we need an extra line of points at the South pole. I’ve also taken the radius to be 1.0 as using the unit sphere simplifies a lot of the graphics calculations that follow.

This gives you the following result:

Next I added an animation thread that increments ‘A’, the angle of rotation of the planet. In the rendering code for the mesh I rotate the points to spin the planet around the poles. The interesting thing here is that you don’t need the Y coordinate as there’s no projection, so that saves a few operations.

The back faces have been removed by using the direction between the surface normal and the viewer. Any face pointing away from the viewer is not drawn.

I already had an implementaion of this in Java, so I just pulled it into the project. The following wikipedia article contains everything you could every need to know about Conway’s Game of Life:

To improve the realism, I added some lighting using Lambert’s cosine rule. The direction of the light is [-1.0, 0.0, 0.0] which makes the intensity calculation straightforward. The light is assumed to be far enough away that the direction of the light is constant over the whole object. The planet is a unit sphere centred on the origin, so the normal to the surface patch is just a ray through the origin and the centre of the patch. I’ve actually taken the top left corner to save having to calculate the centre point, but it doesn’t make much difference to the effect.

In this view, any game of life cell that is ‘on’ is drawn in blue, while any that are ‘off’ are white. The white colour uses the diffuse lighting while the blue is drawn as emissive so you can see the patterns as they go around the dark side of the globe. I’ve also added a line at the 0 and 180 degree longitude positions so you can see the planet rotating.

Here is an image of a “Gosper Glider Gun” about to shoot gliders at itself from around the other side of the planet. The applet link below contains a number of the more common patterns. 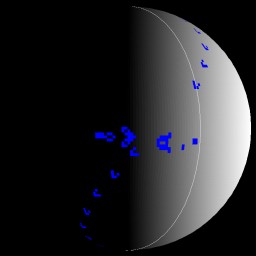 Next Steps:
The mapping of the life grid to the planet mesh could do with some improvement. Anything moving east or west maps around the sphere correctly, but anything moving through the north pole reappears at the south and vice-versa. There are better ways to map grids onto spheres, but that’s for next time. I also have an erosion-based model that I wrote a long time ago to create realistic looking land and water masses, which this was was originally intended for.