I’ve been meaning to look at TfL’s Trackernet API for a while now. It works through a REST based web service which gives access to all the London Underground running boards on a line by line basis. You issue an http request of the form:

and the result is an XML file containing train information for every station on the Victoria Line. Substitute “B” instead of “V” and you get the Bakerloo line instead. I had managed to figure out a way to get approximate train locations when the Victoria Line got suspended one morning, so I couldn’t resist looking to see where all the trains had ended up: 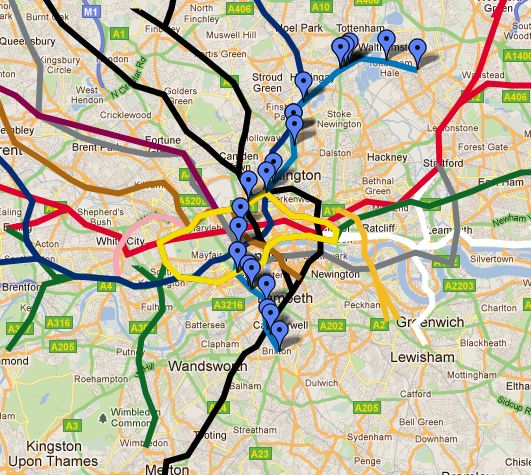 According to my data, there are 25 trains on the line. The way the positions are calculated is quite complicated as the original information comes from the running boards for every station and the time to platform estimates. Trains are uniquely identified through a train number and a set number as a composite key. I simply iterate through all the data for every station and take the lowest time to station for every train, which gives me the train’s next station. Then I use the location code provided by the API and the time to station estimate to interpolate between the last station and the next station.

One feature worth noting is that because the time to station is given for every station along the train’s whole route, you can use the data to build up a dataset of the time required to travel between any pair of stations. Also, because the information is processed from the running boards, the program should be able to process National Rail train locations from the information on their website.

This is still very much a prototype, but once it’s working for all the lines, it will be released as a real-time feed on MapTube.