I’ve been looking at how to export the geographic information contained in a MapTube map into an art tool like 3DS Max or Maya. The reason for this is firstly to make it easier to produce high quality geographic presentations, but also, by employing a recognised art tool chain, we can also get the data into 3D visualisation systems built around XNA (XBox) or Unity.

Originally, I was going to implement a 3DS exporter as this is a well-used format that would allow geometry to be imported by Google Sketchup, Blender, or a long list of professional art tools. After coming across Autodesk’s FBX SDK, I decided to create an FBX exporter instead. Although this is a format that can’t be loaded by either Sketchup or Blender, the SDK is quite flexible and can also export Collada (DAE) and Wavefront OBJ files which the free tools can import. In addition to this, it can be imported by both Unity and XNA.

Autodesk supply a viewer plugin for Quicktime, but I had some problems getting this to work with my first export attempts. The example below shows a simple screenshot: 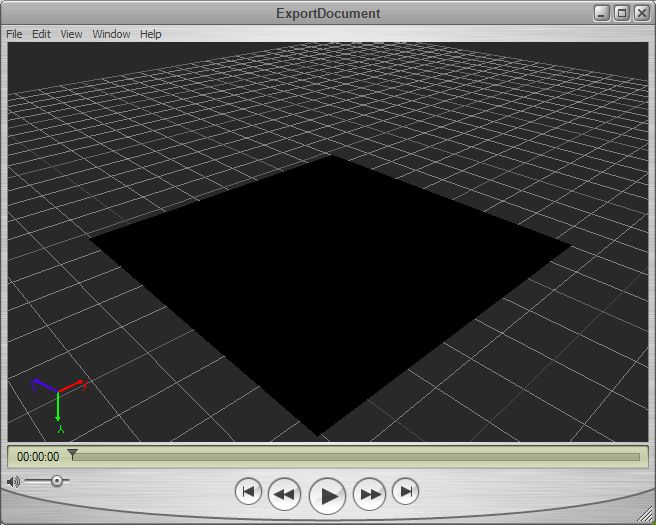 Although a flat black plane on a grey background isn’t fantastic for a first attempt, it took a while to get this far as the examples don’t tell you that the Quicktime viewer doesn’t like ASCII format FBX files and you have to change the example format to BINARY.

This is a copy of the “ExportDocument” example that comes with the SDK, but with the type changed to binary to allow it to load.

The next problem is learning how to create my own geometry and figuring out a way of connecting the native C++ library to the managed C# code used by MapTube. My initial thought was to create a managed wrapper for the FBX SDK and use marshalling, but, on further examination of the SDK, it’s much too complicated to do in any reasonable amount of time. So, plan B is to write the code to do the export as a native C++ process, expose enough methods to allow this to be controlled through marshalling and interop via the C# code and do the FBX export through that route. This only depends on being able to marshall the large amount of geometry data, but this should be possible to work out.

After these first experiments, it’s looking like the pattern will be something like a reader/writer object with a choice of export formats as FBX, Collada or OBJ to allow the assets to be loaded into as many art packages as possible.

The next post will cover the generation of the geometry and its export to FBX.